Skip to content
Uncategorized
April 26, 2015May 3, 2019 FutureEnTech 565 Views 0 Comments Earthquake
Rescue efforts in Nepal are intensifying after nearly 2,000 people were killed on Saturday in the worst earthquake there in more than 80 years. Many countries and charities have offered aid to deal with the disaster.

Seventeen people have been killed on Mount Everest by avalanches – the mountain’s worst-ever disaster. Meanwhile a powerful aftershock was felt on Sunday in Nepal, India and Bangladesh, and more avalanches were reported.
The 6.7 magnitude tremor sent people running for open ground in Nepal’s capital Kathmandu. Screams and the sound of an avalanche could be heard as an Indian mountaineer was interviewed by phone from near Everest by Reuters news agency. The death toll from the original earthquake could rise, as the situation is unclear in remote areas which remain cut off or hard to access.
Many mountain roads are cracked or blocked by landslides. Scores of bodies have been ferried to hospitals in Kathmandu, many of which are struggling to cope with the number of injured.
More than 700 have died in the capital alone. Media captionAs Nick Quraishi reports, many spent the night on the streets. 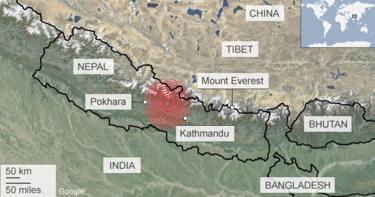 Medics are expecting a fresh influx of patients on Sunday as supplies run low. Rescuers in places used their bare hands to dig for survivors still buried underneath piles of rubble and debris overnight on Saturday.
Army officer Santosh Nepal told the Reuters news agency that he and his soldiers had to dig a passage into a collapsed three-storey residential building in Kathmandu using pickaxes because bulldozers could not get through the ancient city’s narrow streets. “We believe there are still people trapped inside,” he told Reuters. (Source:bbc )
———————————————————————

Some of the Earthquake Safety Precautions are mentioned below….

What to do before an earthquake.

FutureEnTech has 1639 posts and counting. See all posts by FutureEnTech

Start Building UI and UX in 2021: The Most Out Of Mobile Apps Services

Django Framework – What You Need To Know

14 Benefits of Team Building For Your Business

A Guide to Write a Cybersecurity Policy for Your Company