Skip to content
Uncategorized
April 3, 2016May 3, 2019 FutureEnTech 343 Views 0 Comments Vehicle
The all terrain vehicle was originally introduced by firms to supplement the decrease in motorcycle sales during the winters. The first ATV introduced was the ATC90 by Honda in 1970.
All-terrain vehicles (ATVs) are off-road vehicles for recreational use. ATVs are motorized vehicles that are meant to be used off-road or on dirt roads, not on paved roads or highways. As defined by the American National Standards Institute, an ATV is a vehicle that travels on low-pressure tires, with a saddle straddled by the rider, and with handle bars for steering control. ATVs can be used for either work or recreation purposes and are designed for use in a plethora of conditions and terrains.
ATVs are used extensively throughout North America, Australia, Europe, and other parts of the world by farmers, contractors, hunters, thrill seekers, and even police and military forces. Their multipurpose nature and capabilities lead to their popularity and use throughout the world. Some recreational users prefer ATVs over off road motorcycles due to their increased stability and capability to handle more extreme terrain.
The students of KJ Somaiya College of Engineering showcased an all-terrain vehicle (ATV) – Red Shift Car, Raudra 3.0, which is capable of travelling on any kind of terrain such as military areas, snow, mountainous areas, agricultural fields, etc. 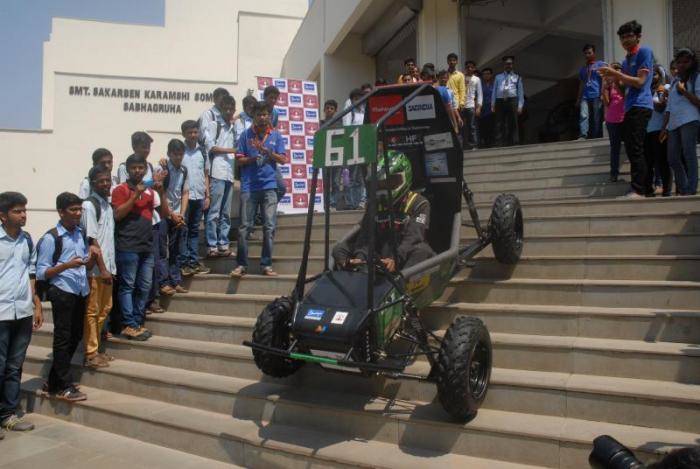 Image source: DNA India
The team of 27 passionate third year engineering students, 23 boys and four girls, designed and fabricated a single-seater all-terrain race car to compete at BAJA SAE competition organized by Society of Automobile Engineers (SAE). BAJA SAE Events are held in four countries over the globe, which are India, U.S.A, South Africa and Korea. The SAE is an engineering and scientific society dedicated to the advancement of automobile sector.
Giving a demonstration of the vehicle’s capabilities, Harsh Jain, the captain of the team that designed it ran the car over rocky surfaces and climbed down steep steps, while students cheered.
Harsh said, “We took around six months to complete the entire model, two months went in designing and four months for manufacturing. The total cost incurred is Rs 4 lakhs which came in from the sponsors as well as the college management. The car has a top speed of 60 km per hour and gives a 40 km mileage. While over 400 teams had registered for the competition, only 120 had managed to make it to the main event held in February 2016,” as reported by DNA India. 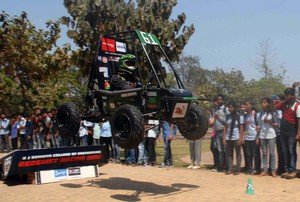 Image source: UNI
The students have already received a call from the Della Adventures group regarding this car and want the students to design the same car for them. “Apart from the engine all parts were designed by us. All participants were given this engine and had to design the vehicle such that it gives maximum performance,” said Kushal Visaria, part of the 27-member team.
The students had been working from last six months, over the car at the college-provided workshop mainly in the evenings after classes, sometimes into the night and even during vacations.
Generally, ATV offers advantages from both the utility and sport quads to maximize its effectiveness and excitement in rough terrain. ATVs are an important vehicle in today’s society and provide many people with a way to carry out their work day or have a day of fun.