Skip to content
Uncategorized
August 3, 2016May 3, 2019 FutureEnTech 263 Views 0 Comments Communication, Education, Gadgets, Recycling
Alexander Graham Bell’s invention of the telephone in 1876 rang in the era of talking at a distance.

Innovators in the 20th century expanded the telephone’s reach across continents and oceans, figuratively shrinking the world and connecting its citizens. Electronic switching systems and other technological advances helped customers place calls without the help of operators.

By the year 2000, more than a billion people all over the world had gone wireless—using cellular technology to talk and deliver text and photos on super-lightweight telephones smaller than a deck of cards. 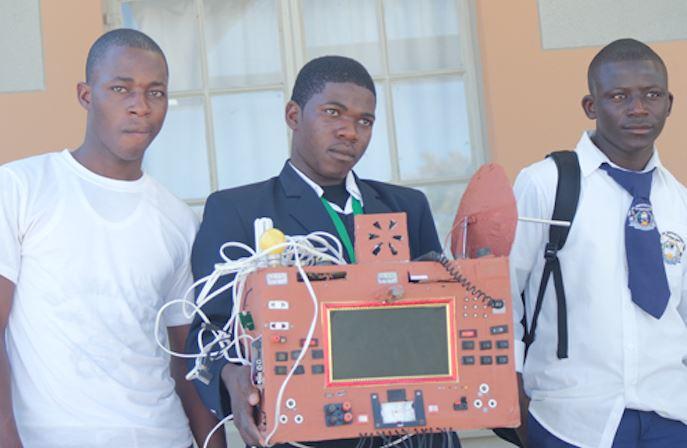 Now, an invention from a grade 12 student Simon Petrus from Abraham Inyambo Senior Secondary School, a rural school in Namibia could help to make free calls and solve the country’s wireless problems.

The handset does not need airtime or SIM to make free calls as it uses radio frequencies to place calls anywhere as long as there is signal.

Using the concept of ‘Best out of Waste,’ he made this device using spare parts from a telephone and a television set.

The invention also functions off power supplied through a radiator. It has a light bulb, a fan and a socket for its charger.

The project won first place at the regional level recently and he is now targeting for the national competition.

In past, he won a gold medal at the NamPower schools’ competition, held at national level for inventing a two-in-one machine that works as a seed drier and cooler.

According to him, his unemployed parents sacrificed over N$2 000 during that period and made sure his project was successful by sourcing funds for it. (Source: New Era)