Proportions and density of filaments can be optimised based on wind energy analysis on buildings, or challenged by architect’s designs using it as a dynamic façade. Moya can wrap around buildings, coat windows, line bridges or be hidden in structures. 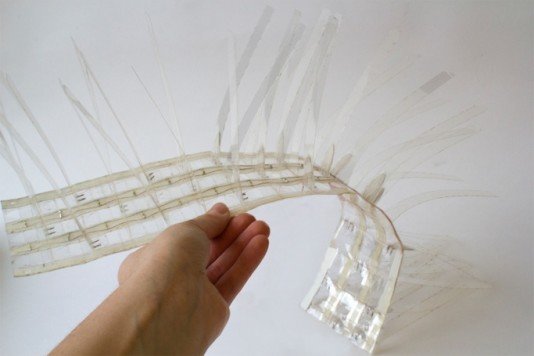 RCA Graduate show (Credit: Jamesdysonaward)
Moya Power uses a number of finger-like filaments which are moved by passing currents of air – with the movement harnessed to generate electricity. The filaments can be optimized based on wind energy analysis for maximum efficiency, or adapted to architect’s designs to be used as a dynamic building façade. The end result is a low cost flexible material that can wrap around buildings, coat windows, line bridges or be hidden in structures unlocking their potential as energy generation site.
As wind moves each filament on a sheet; the strain energy caused by the movement is converted into electrical energy. Many tests were conducted in order to determine the dimensions and proportions of an individual filament. An important factor when considering the functional design of a single element was how it would be easily mass-produced in a sheeting process in order to keep costs to a minimum. There is a compromise between complex shapes that may catch the wind more effectively, when compared to simplified shapes that will be more efficient to mass produce.
A prototype of a flexible sheet was produced with all the elements embedded in the single sheet. In addition to this, LEDs were integrated into the flexible sheet as a means of directly transferring the energy to an immediate application. The energy is first harvested and rectified, then stored intermittently in capacitors. (Source: Jamesdysonaward)

FutureEnTech has 1584 posts and counting. See all posts by FutureEnTech

Dynamics 365 Customer Insights Will Assist You For Better Business Choices

What Does the Future of SEO Look Like and How Can You Prepare for It?