Skip to content
Uncategorized
June 18, 2015May 3, 2019 FutureEnTech 350 Views 0 Comments Villages
Travelling in India is like a roller-coaster ride, thrilling and unforgettable. India has something to offer to every traveler: scenic beauty, beaches, mountains, fauna, adventure sports, luxury hotels, historical monuments, and a cultural treat for all the senses… The experience will leave you a little exhausted; because in every moment, there’s so much to live. If you think you’ve seen everything there is to see, you couldn’t be more wrong. India isn’t called Incredible India for nothing. This wonderful land is riddled with more mysteries and astonishing things than Alice or Dorothy could ever have imagined.
India is having an agro-based economy depends the most on its villages for growth. The soul of India lives in its villages, 60 percent of the population still lives in villages of India. Indian villages have a very beautiful and attractive lifestyle. The Villages are free from the hustle and bustle of a city life; villages are peaceful, calm, quiet and full of greenery where one can breathe fresh air. The beauties of villages are described by the way villagers happily live in the small huts or a home, made by clay or mud. A big open area with trees at the front and a vegetable garden at the backyard, surrounded by the bamboos. The villagers are socially knit together, every evening they assemble in the village “Chopal” with their ‘hukkas’ and chatting and talking goes on till late the night. Some of Incredible villages of India are described below which has unique approach and surrounding.
The village that produces the most twins
45 in every 1000 births turn out to be twins in Kodini, a village in Kerala. And while India has one of the lowest twinning rates internationally, Kodinhi has a rate that’s at par with the highest twinning rate in the world. This phenomenon, which is only three generations old, has been accounted to a natural anomaly rather than a genetic mutation. According to villagers the twin phenomena has only been happening since 1949.

Image source: 1.bp.blogspot.com
Shani Shingnapur – The most trusting village which doesn’t need door
The village of Shani Shingnapur in Maharashtra is certainly the most trusting village in India. Why? The village has a local tradition of not installing doors and locks in its houses. Their faith in the local deity, Lord Shani leads them to believe that anyone stealing, would face the wrath of the local deity. The village does indeed have a low crime record, so perhaps there’s a lesson in honesty and trust for the rest of India.

Image source: Women Planet
Shani Shingnapur, located in Maharashtra, is a village that defies every newspaper report you have ever read. Touted as the safest village in India, this place is known for its lack of doors to houses. Not just that, there is no police station in the village. And no, we are not making this up. By the way, Shani Shingnapur has ‘broken’ another interesting record. The village has the country’s first lockless bank branch (UCO bank) now.
The village that builds eco-bridges 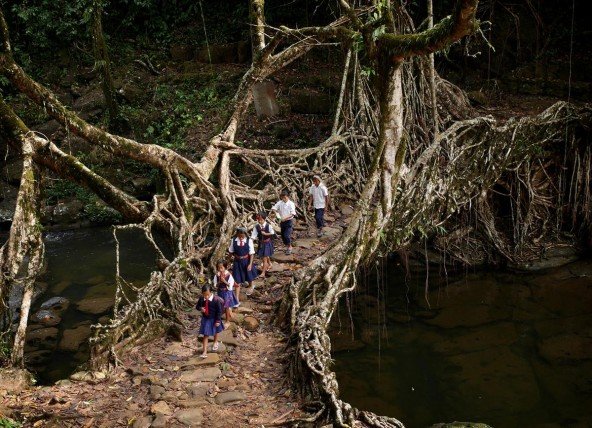 Image courtesy: cdn.theatlantic.com
Mawlynnong, a village, in the East Khasi Hills in Meghalaya, has the acclaim of being the cleanest village in Asia in 2003. It’s also famous for its most popular eco-attraction – living root bridges. The Khasi villages are connected by a network of pathways known as the King’s way. Throughout this network, hundreds of living root bridges are formed by intertwining roots of Ficus elastica. These root bridges, some of which are over a hundred feet long, take ten to fifteen years to become fully functional. They are also extraordinarily strong — some of them can support the weight of 50 or more people at a time.
The village that plants 111 trees for every girl child

Image Source: piplantri.com
In a country that still favours the birth of a son, Piplantri village in Rajasthan not only embraces daughters but has created a tradition that benefits the planet. This endearing village plants 111 trees every time a girl is born. The village also collectively contributes Rs. 31,000 and puts it into a 20-year fixed deposit for the girl. Parents also sign an affidavit stating that their daughter will receive proper education. and that the girl will be married only after she reaches legal age. Truly an exceptional and inspiring story! A brilliant exercise in eco-feminism, this should inspire India and the rest of the world. This wonderful eco-conscious tradition ensures that an increase in human population will never come at a cost to the environment. It is literally helping to ensure a greener future with each new generation.
Mawlynnong – Asia’s cleanest village

Source: Flickr
Mawlynnong, a small village in Meghalaya, was awarded the prestigious tag of ‘Cleanest Village in Asia’ in 2003 by Discover India Magazine. Located at about 90 kms from Shillong, the village offers a sky walk for you to take in the beauty as you explore it. According to visitors, you cannot find a single cigarette butt/plastic bag lying around there.
Punsari – The village with WiFi, CCTVs, AC classrooms and more

Source: Dainik Bhaskar
Punsari, located in Gujarat, puts most metros to shame. Funded by the Indian government and the village’s own funding model, Punsari is no NRI-blessed zone. The village also boasts of a mini-bus commute system and various other facilities. Believe it. Imagine a village that offers Wi-Fi connectivity, has air-conditioned primary schools equipped with CCTV cameras and cooks preparing midday meals. All the streets in the village have concrete roads, people get chilled mineral water for drinking and there is an independent public transport system.
Hiware Bazar – The village of 60 millionaires
Hiware Bazar, located in the Ahmednagar district of Maharashtra, has transformed from being a place fraught with issues to being possibly the richest village in India. The sole reason for this fairy-tale change is one man called Popatrao Pawar. He banned all addictive substances to minimize expense and encouraged the villagers to invest in rain-water harvesting, milch cattle, etc.

Source: Hiware Bazar
There are a record 60 millionaires in the village and barely any poor. From 168 Below Poverty Line families in 1995, Hiware Bazar now has just three. The villagers continue to strive to see a day when not one person is poor.
Dharnai – First fully solar-powered village

Source: Greenpeace
Dharnai, a village in Bihar, beat 30 years of darkness by developing its own solar-powered system for electricity. With the aid of Greenpeace, Dharnai declared itself an enery-independent village in July. Students no long need to limit their studies to the day time, women no longer limit themselves to stepping out in the day in this village of 2400 residents. Now if only cities could do the same, right?
Chappar – A village that distributes sweets when a girl is born

Source: SORTEDD.com
Chappar village in Haryana has a woman Sarpanch. But Neelam is no ordinary Sarpanch. She made it her life’s mission to change the attitude of the villagers towards women, and she succeeded. Not only do the women of the village not wear the ghunghat anymore, but despite Haryana being the state with the lowest girls ratio (an abysmal 877) in this village every newborn, regardless of his/her sex, is welcomed into the world with sweets and festivities.
Kokrebellur – A village that really loves its birds

Source: Flickr
Kokrebellur, a small village in Karnataka, believes in the conservation of nature. While most other villages consider birds a nuisance because they harm crops, Kokrebellur boasts of rare species of birds that fly around and don’t even mind humans much. The villagers treat their winged compatriots as family and have even created an area for wounded birds to rest and heal. Wonderful, isn’t it?
Pothanikkad – The village with a 100% literacy rate

Source: Deokothamangalam
Unsurprisingly in Kerala, Pothanikkad village was the first in the country to achieve a 100% literacy rate. Not only does the village boast of city-standard high-schools, but it also has primary schools and private schools. Guess the number of people the village has educated? Well, according to the 2001 census there are 17563 residents living in the village. The best part is that it answers the question.
Bekkinakeri – The village that rid itself of open defecation by ‘greeting’ lota-bearers

Source: World Bank
Bekkinakeri village in Karnataka has redefined the point of wishing someone a ‘Good morning’. Frustrated with the practice of open defecation, the village council attempted to curb it by requesting people to not do so. When that didn’t work, they stationed themselves early morning near ‘popular’ defecation sites and wished every perpetrator a very good morning. The trick worked! Too embarrassed to go on with their business, the openly defecating population has now stopped the practice completely.
The heart of India lies in its villages. The rural India is a complete contrast to the urban one with its sky scrappers and rapid pace of life. India villages are, in fact, the true representatives of India. Family bonding, social responsibilities, religious practices and others are the innate features of village life. The Indian ‘rural cosmopolitan’ makes India more interesting and enriching.
(Source: Scoopwhoop)

FutureEnTech has 1563 posts and counting. See all posts by FutureEnTech

Why Use To Microsoft Dynamics 365 Marketing for Event Management?

SEO and SEM: They are Different but Work Together